Are You A Food Stalker? 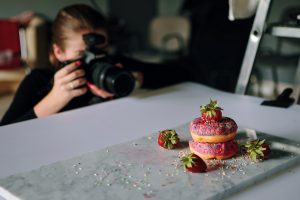 Are You A Food Stalker?

Yes, it’s a thing. Though it’s hard to get a restraining order.

A food stalker is someone for whom a certain food-stuff is something they can’t live without. Or at least they feel they can’t. They dream about it; yearn for it; have an emotional connection to it; can’t bear to be apart.

And when the love affair ends, they spend an unhealthy amount of time obsessing about it; tracking it down on social-media and trying to get back that feeling with endless attempts at recreating it.

I’m not trying to be flippant about a serious subject. Merely drawing a parallel with obsessive behaviour and how finding the ability to let go is the only way to move on with your life.

Perhaps you have a strong connection with a certain food? Is there something that resonates so deeply with you that you’re mopping up saliva just at the very thought of it?

For many it’s pizza. Others crave ice cream; that old go-to in times of emotional crisis. Cake always ranks highly on the list; as does chocolate. But surprisingly, bread has captured more hearts – while contributing towards the stopping of them – than just about any other food-stuff.

Before you assume that I’m being judgemental, or just don’t get-it: let me explain. I was a bread-a-holic. I loved the stuff! I’d practically float six inches off the floor every time I passed a bakery. To be honest, I could rarely pass it by without buying something warm, fragrant and wondrous.

When I think back now: I cringe at the hold this item of food had upon me. It’s not like there weren’t any side-effects. A couple of minutes of pleasure would be followed by several hours of bloating and discomfort. Best not mention the gas!

But do you know what? Despite how much I loved bread (oh how I did), I will never eat another slice ever again. And what’s more, I no longer miss it.

Love turned sour. Or at least my love affair with bread and processed carbs in general did, once I switched to a more natural way of eating. For a long time, I’d resented the lack of control I had over my food choices and the way in which this impacted the body, health and lifestyle I wanted. When I was finally able to see things with clarity; weighing the pros and cons of staying the same vs making a pro-active choice: the answer was clear.

Believe me, I totally understand the emotional connections we form with food. The taste often being a trigger that allows us to revisit an experience, feeling or memory, on a deeper level: Grandma’s apple pie now she’s no longer around; a huge bowl of ice-cream and your favourite movie when you’re feeling down and in need of comfort; a bumper-bucket of popcorn at the cinema as part of the overall experience. We’re creatures of habit, and familiarity feels safe.

While it’s human nature to want to recreate the good times and seek comfort in familiar experiences: it should only be done when it isn’t negatively impacting your health.

A lifestyle change, reflected in healthy food and exercise choices, must therefore, also include a mental change. And to achieve that we must say goodbye to some of the things we once loved. To put this into context: understand that the food aspect is only one part of the memory, and not the most important part.

Grandma’s company was the important thing, not the pie; you saw the film, regardless of how much popcorn you stuffed into your mouth; and that bowl of ice-cream when you were down, only served to instigate a sugar rush and subsequent crash when blood-sugar levels dropped once more.

Warning: clinging to certain foods leads to obsession. Once you transition to the mindset that food is there to further your goals, it soon becomes easier to let go of the items that hold you back.

So, if logic tells us that ice-cream, popcorn and bread aren’t conducive to our positive lifestyle choices, why waste any time trying to replicate them? The reality is, that it was their sugar and highly-processed carb content that made them taste so damn good in the first place. Take those ingredients out and what are you left with; seriously?

I’ve lost count of the number of Paleo/Keto friendly recipes for bread or ice-cream, and the quest for the perfect low-carb pizza-crust is a whole other level of alchemy!

And to be honest, I don’t think they’re all that healthy; many of them relying on an assortment of chemical elements to achieve the required structure/texture. They may not contain carbs, but if I can’t pronounce something, then I’m sure as hell not going to eat it.

More relevant, in my opinion, is the fact that this obsession is generally about recreating foodstuffs that never did you any good in the first place. A new lifestyle warrants optimism and need not be infected with thoughts of loss; especially when, in reality, you’re gaining so much more.

Take a lesson from Victor Frankenstein. It doesn’t matter how much time and effort you put into recreating your lost love, it will never turn out as good as you hope. And if you do succeed in bringing to life something that loosely resembles the object of your desire, it may try to kill you. At the very least it will keep you connected to an item of food that you no longer need, never did you any good, and doesn’t fuel your new way of life.

Time for a clean break. Stop ‘pinning’ articles on the perfect pizza-base, end your bread-porn habit, and leave the ice-cream themed social media groups before it’s too late. There’s a whole world of amazing food out there and new emotional connections to be made; all of which support your lifestyle choices, not sabotage them.

Consider this one last point: If your taste buds are changing due to the lack of unnecessary sugar and processed carbs: how could you ever hope to recreate the taste you remember?